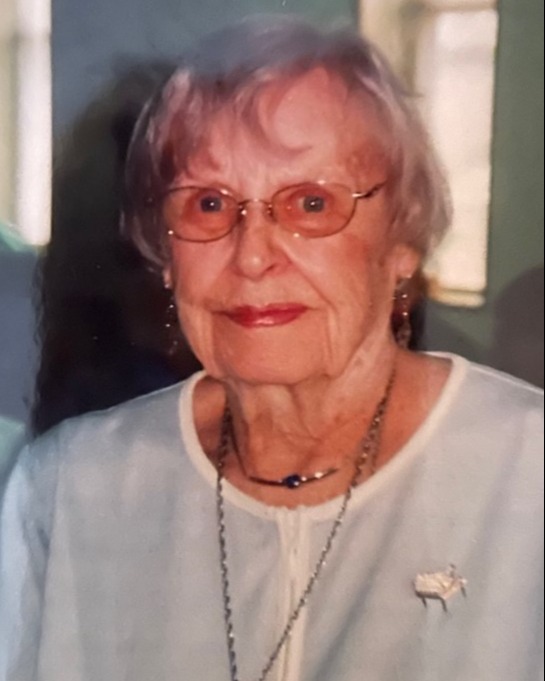 DOLORES MARY ALBEL ZABOLIO died January 17, 2023. She was born April 15, 1918 in LaCrosse to Leo and Sadie Albel. At the age of nine, Dolores took piano lessons from Sister Clara Linfelder at St. Rose Convent while attending Holy Cross Grade School. She graduated from Aquinas High School in 1936. After Aquinas she went on to WWTC to pursue a commercial course. On January 22, 1941 she was married to Edward Zabolio by her Uncle Bert, the Reverend Albert Albel who came via train from Nebraska. Her husband preceded her in death on July 28, 1960.

Dolores was an avid needle pointer. Her mother taught her this art when she was fifteen years old. Dolores made many pieces of needlepoint throughout the years. She did several pieces for Blessed Sacrament Parish. One was in memory of her sister, Mary Roob, who worked as secretary for Monsignor Wagner. Another piece was in Franciscan Skemp Chapel in memory of her Mother, Sadie Albel. She won a plaque for two needle point “Young Fester” Oktoberfest dolls in 1974 for the needlework contest. She liked collecting antiques, reading and traveling. She went  to Europe in 1966, and also to Hawaii, Canada, Mexico and many states. Workers and friends have known her as the “Dove Candy Lady” as she has passed out the candy in appreciation for assistance and kindness.

She was a member of Blessed Sacrament Church since 1964, Franciscan Skemp Auxiliary, KC Women,  RSVP, Hammond Organ Club, and South Side Senior Center. She was one of the original members,  organist and pianist for the Sweet Notes Senior group and enjoyed performing in many nursing homes in and out of LaCrosse. She took oil painting lessons from Sister Margaret Scholosser.

Special thanks to the staff at Hillview Healthcare Center for their kind and capable care.

To order memorial trees or send flowers to the family in memory of Dolores Zabolio, please visit our flower store.