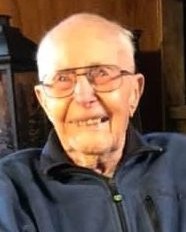 John was born in Falkton, South Dakota August 6, 1922 to Otillia (Foster) and Ambrose Haag. His parents and four brothers farmed. John learned to “make do” by fixing things instead of buying new and to conserve those resources attained by hard work. There were happy times and hard times growing up during the”Dirty 30’s” Depression era. His childhood ended when his Mother, Otillia, died of pneumonia when he was 14 years old. Following his Mother’s death, he and his Father moved to live on the home farm in Mt. Horeb, Wisconsin. He helped with the chores and as a “hired hand” when he was old enough. Although his formal education ended in eighth grade, he was clever and mechanically inclined. He enlisted in the Army and served in the Pacific Theater as a tank and heavy equipment mechanic.

Prior to “shipping out”, he became acquainted with Clara Kalsow. She worked at his Aunt Martha’s optometry practice in Neillsville, Wisconsin. They maintained correspondence during his military service. They married on June 24,  1946 and settled in La Crosse. John worked construction and installed furnaces “on the side”. He was an accomplished “tinner” who could bend and fashion sheet metal, as well as using his mechanical and problem-solving aptitude. After a time he came to work in the research and development lab at Trane Company.

John was a devoted husband, father, friend, and neighbor. He and Clara enjoyed traveling in their retirement; they were always ready for another adventure. John was always ready to help out friends who needed something fixed or a ride. He was an active member of the VFW in LaCrosse. He served on the Honor Guard for countless veterans’ funerals.

A Funeral Mass will be held at 11:00 AM, on Tuesday, October 4, 2022, in St. James the Less Catholic Church, 1032 Caledonia St., La Crosse. Rev. Robert Letona will officiate with burial to take place in Catholic Cemetery, La Crosse. Visitation will be from 9:30 AM until the time of Mass at Church on Tuesday.

To order memorial trees or send flowers to the family in memory of John Henry Haag, please visit our flower store.